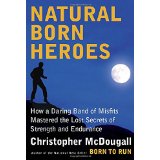 Anyone on the trail either hiking or running invariably wonders at some point, “How far could I go if I had the time?”. With a subtitle of “How a Daring Band of Misfits Mastered the Lost Secrets of Strength and Endurance”, Christopher McDougall attempts to answer the question of just how much we can endure, both physically and psychologically, when put to the challenge. And in answering those questions he aims to understand “the art of the hero”, and to explore the “foundation of both Greek theology and Western democracy: the notion that ordinary citizens should always be ready for extraordinary action.”

The book, which follows his 2011 best-seller ‘Born to Run’ about endurance running, retells a war story that occurred in April 1944 during World War II on Nazi occupied Crete, an island known for its isolationism, spirit of rugged individualism and adherence to what resembles a “paleo” diet since they eat mostly home raised meat plus vegetables which were either grown or foraged in the surrounding mountainous forests.

McDougall opens his book with a retelling of how a band of British Special Operations soldiers together with Cretan resistance fighters kidnapped the Nazi General Heinrich Kriepe. The kidnapping occurred near the general’s Nazi headquarters with a daring display of “chutzpah” on the part of the kidnappers. Once the general and his car had been commandeered, the British-led team than spent more than two weeks navigating the very rugged Cretan backcountry on little sleep or food while they transported  the general to a point where he could be conveyed off the island as a prisoner of war.

The journey was arduous and required truly superhuman physical skill and nerves and resolve of steel. And the mission proved fatal for some of the resistance fighters as well as Cretan citizens of the town of Anogia who were massacred by the Nazis as they struggled to re-capture their general. But it is the endurance of the soldiers that McDougall explores in the book and the topic of endurance in general often in a zig zagging manner darting between the main narrative and long diversions into ostensibly related topics.

Weaved between the narrative, McDougall details a history of military survival training and takes a questionable detour to look at the world of Parkour, and finishes with several chapters devoted to a history of nutrition especially as it has been practiced by endurance athletes. McDougall contends that the gods of Greek mythology learned to survive adversity while dealing with human scale challenges even as they inhabited a godly abode. Some of those gods such as Zeus originated on Crete and they created a Grecian zeitgeist of heroism that was embodied in Crete during the war where men, women and children of the Crete countryside embodied paideia, arete and xenia (skill, strength and desire) but understood that “heroes are protectors” but, “your’e only strongest when you have a weakness for other people”, McDougall writes.

And he discusses the ancient Greek military technique of pankration, a type of free form wrestling, which has its roots in Greek mythology and dates to the Olympic games of 648 B.C.  He touches on ancient martial arts and “The Natural Method of Training” published by Edwin Chekly in 1890, among other techniques, after introducing us to suburban English women who have mastered the art of Parkour. Named for the French parcours,  Parkour acolytes learn to turn an urban landscape into a playground in which they have taught themselves to scale brick walls by running up them, balance and jump off of railings, landing in a somersault, only to spring back up and over the next obstacle. Parkour, McDougall posits, proves that humans have an innate ability to overcome physical obstacles tapping the ‘elastic coil’ stored up in our tendons, ligaments and even our fascia. (see a video of these Parkour moms here).

McDougall strains at times to make the case that the British special ops and Cretan resistance fighters were successful because they harnessed the skills and spirit embodied in these ancient techniques that have some Grecian roots. But one of the main focuses of the author’s thesis rests in his theory about the benefit of the Cretan diet, essentially a paleolithic meat and vegetables diet. McDougall interviews and visits with world renowned  South African exercise physiologist  Timothy Noakes Ph.d as well as tracking down the enigmatic chiropractor turned nutritional  consultant both to the stars and to star athletes, Phil Maffetone D.C.

Both Noakes and Maffetone eschew our mainstream carbohydrate laden diet as unnatural, unhealthy and down right dangerous. They both explain that from an evolutionary point of view humans have evolved to eat meat and plants and if those plants contain carbohydrates, then they are at least complex carbs, not the simple sugars that appear in almost all of our processed food, from Ketchup to soda to breakfast cereals and even packaged bread. Our consumption of large amounts of sugar, they explain, stimulates our body to release insulin, which stores the sugars in our bodies as fat and than drives us to consume even more sugar laden food to repeat the cycle.

When you retrain your body to burn fat as fuel, and not carbohydrates, you can increase your endurance and remain more satiated for longer periods of time, the experts explain. When Dr. Noakes adopted the eating lifestyle he professed, he lost weight and cut his time in the famous South African Comrades 56 mile ultra-marathon by two hours and reduced his time to run a 5K race by more than 20%, all that at the age of 56. Even the entire Los Angeles Lakers basketball team finally cut sugar out of their diet, began eating grass-fed beef, nuts and  kale chips. The exercise and nutritional guru Phil Maffetone went a step further and maintained that not only was the no carb or very low carb diet healthier but combined with some training tips, the eating lifestyle changes would reboot the subject’s metabolism to start burning fat as its primary fuel source instead of glycogen and sugars.  And since the body stores much more fat than sugars, endurance will naturally improve. He is even beta testing an app to help make the switch.

Overall, Chris McDougall presents a compelling argument that anyone could probably push themselves much harder, set higher standards and tap in to inner resources. You hiked 10 miles today? You could definitely push on. You ran a marathon?  Start training for an ultra. The key to ‘mastering the lost secrets of strength and endurance’ then, would be to understand human evolutionary history and make a course correction in one’s nutrition. Assiduous training and having resolute confidence in your abilities like the Parkour moms would also help. And having a tantalizing goal like kidnapping a Nazi general right from under the noses of his hapless soldiers would help as well. 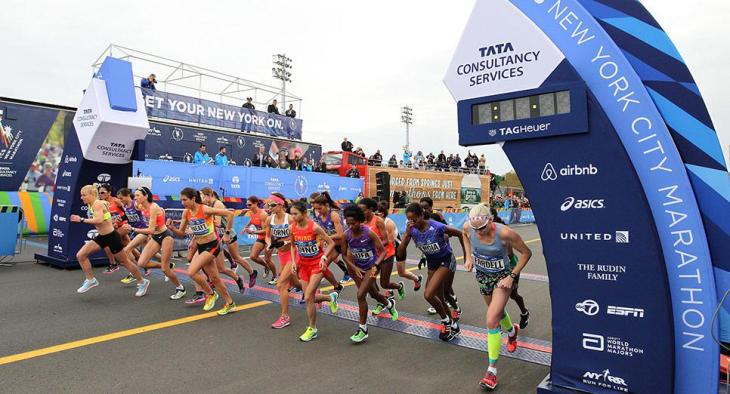 This past Sunday morning about 50,000 people of all ages and abilities challenged themselves to run the New York City marathon, 26.2 miles through the streets of the city, finishing the last 6 miles in Central Park. The elite runners ran at close to 13 miles an hour, finishing in a bit over 2 hours. About half of the runners finished in less than four hours and fifteen minutes and some, well, let’s just say, they could have walked as fast.

This past Sunday night about 50,000 people sat for more than 3 hours to watch what would be the final game in the 2015 baseball World 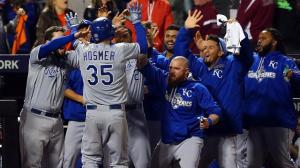 Series, where the Kansas City Royals beat the New York Mets, winning their 4th game out of five. The baseball fans were encouraged to get up and stretch after the completion of the seventh inning and people were free to walk around during the game as well. But watching a baseball game is a spectator sport.

There were most likely some people who ran the marathon in the morning and went to the baseball game at night, for a memorable Sunday participating in two significant annual events. If someone was lucky enough to fill their day with both those events, that would indeed be a day to remember.

Mostly though I suspect there were the runners and there were the watchers. And on this past Sunday they were pretty well balanced, at about 50,000 people apiece.

The runners and the watchers. Or, to think of it another way, the doers and the sitters, neither one inherently superior to the other just markedly different types of activities. On a broader societal scale, we can categorize ourselves, at times, as either consumers or producers, each necessary and invaluable. We all can not be exclusively consumers for than who would produce what we consume? And this past Sunday, the runners benefitted from the cheering crowds who had lined the streets to watch them, not so different from the 50,000 people who sat in Citi Field to cheer on their favorite baseball team. 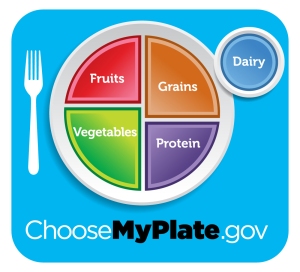 As a city, a community, a country, and even a world, we need both the runners and the watchers, the producers and the consumers. But as individuals, we also need our own varied diet of activity, similar to the United States Department of Agriculture Food Plate, which recommends a variety of types of foods in healthy amounts. Not all carbs and not all proteins. Not all fruits and not all vegetables. Similarly we need to mix up the watching with the running, the consuming with the producing. 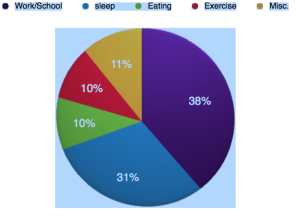 What if in addition to a ‘My Plate’ diagram, we also referred to a ‘My Feet’ diagram, which would suggest where our feet should be throughout an average day. About one quarter to one third of the day would show our feet in bed, a third or so of the clock would show our feet at work, in school, creating and producing or otherwise involved in some type of sedentary activity. A portion of the My Feet pie chart would show our feet under the kitchen table and a miscellaneous slice would allow for personal needs. But a solid slice of the daily pie would show our feet in a pair of sneakers, either indoors or out, getting some exercise.  And there would also be the ‘Weekend My Feet’ chart which would replace a portion of the work/school slice with even more time exercising or otherwise being active.

This past Sunday was an interesting look into how so many people  chose to spend their time in a major metropolitan city. The runners we know also prepared by training for a few months in advance.  And the World Series attendees had to hustle somewhat to get their ticket and the price may even have caused them to break into a sweat although their chosen activity was mostly sedentary with some periods of standing and cheering.

But in a well balanced life, we would all run some and watch some, consume some and produce some, win some and as reality would have it, lose some too.