My son and I set out to explore a rock climbing crag nearby, recently approved by the municipal land owners and sanctioned for climbing. The area is an otherwise unused strip of land, long with several undulations of granite cliffs no more than 100 feet tall with several smaller rock formations at its base. The most prominent feature of this wooded land however is a series of towering power lines. The land is actually a power company right of way for high capacity electrical lines. Indeed, if you listen carefully it is possible to hear a faint crackling of electricity traveling through the lines at the top of the steel super structures which stand guard on otherwise undeveloped woodlands.

No formal trails lead to the rocks but faint foot paths have stomped down tall grasses. In some areas a dirt path has emerged but no blazes mark the trail. Leave the parking lot, look for a faint trail and walk. Look for a stream and cross by a  fallen log the instructions explain. Pick up a trail on the other side, faint as it is. Finally crossing a dirt road one sees an official sign at the informal entrance to this newly opened rock climbing area.

Neither my son nor I are real climbers. We have climbed in indoor climbing gyms which simulate some of the athletic moves needed for outdoor climbing on real rock slabs. And we have climbed once in the famous Shawungunk climbing area in New Paltz, NY under the supervision of a watchful and well trained guide. So we were just scoping out this new venue to see if we and the rocks made a good match.

By the time we started hiking into the woods we did not have too much time to explore but did have enough time enough to spot a flock of goldfinches dressed in their bright summery ellow and black plumage flying in and around some low brush.

On the way back we lost the trail, with no supplies, lights or even water. We were never more than half mile or so from the car but with dusk approaching the thought of stumbling around in the dark in an unfamiliar woods was unappealing. While we lost the main trail, faint as it was, we picked up several other ‘herd’ paths – that is, trails going this way and that left by the footfalls of previous hikers. On some summits a herd path usually leads to a great view, or short cut to the trail’s continuation. The herd path deviates from the main blazed path, placed purposefully by the trail maintainer. White rectangles 2 inches wide and 3 inches long mark the entire 2,160 miles of the Appalachian Trail.

Herd wisdom, or the wisdom of the crowd, has been around for eons. Thompson’s Gazelle‘s use the wisdom of the crowd to turn tail and bolt in the opposite directions from a prowling lion. Schools of fish do the same. And now a days humans ‘crowd source’ using the collective information gathering skills of hundreds to pull resources together to yield new information hitherto not easily knowable.

But walking in the woods in the waning light, pushing away boughs of thorn bushes obstructing the faint herd paths we had little choice but to follow the foot steps of walkers before us, and hope that their intentions in walking this ground were our intentions, that they were going, or coming, from the direction we sought. It felt comforting to embrace the wisdom of the footsteps of the crowd which indeed led us back to where we started.

Hike your local glen or glade. Hear the sounds of cascading brooks. Take a few days for a rim to rim hike of the Grand Canyon, or circumnavigate Mt. Rainier‘s 93 mile Wonderland Trail. Perhaps be lucky enough to trek to Mt. Everest base camp, traversing the foothills of the Himalayas.

Now, start dreaming about Mount Sharp, the most exotic new hike most of us will never do. But, thanks to NASA’s Jet Propulsion Laboratory we can follow Curiosity the Mars rover as it begins its approach toward this 18,000 foot mountain. 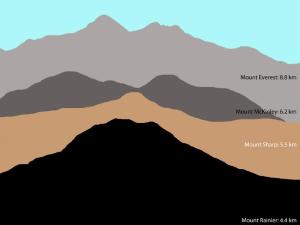 Despite the lack of water falls, the sound of birdsong or the smell of fresh pine needles, Mount Sharp has one thing no other hike this side of the Milky Way can boast: It has never seen the the imprint of a human footstep. For even if you hike to the coolest trek on our planet, you will likely not be alone. You may even find an empty plastic water bottle lying in the forest duff or see the remnants of a campfire from the weeks before.

Contemplate finding complete solitude on virgin ground. Absorb majestic views never seen before, except by a camera on a  rover. But take your own water, as you will find none  on the red planet and take your best down coat, mittens and booties to help  survive nighttime temperatures of -100F. Oh, and take oxygen too. Perhaps the  hike on the nearby forest trail I’ve been to a dozen times might do just fine. 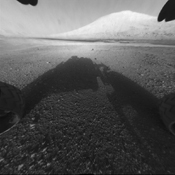