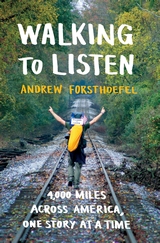 Walking to Listen: 4,000 miles across America one story at a time, by Andrew Forsthoefel (Bloomsbury Press 2017)

Who is Otho Rogers and why should we care? Rogers, a  73 year old cowboy and preacher in Melrose, New Mexico has plenty of advice for living to whomever may listen. Author Andrew Forsthoefel met Rogers during his walk across America.

“And time goes by like, like cross ties on a railroad track just chh, chh, chh, chh. These days are gone. So while you got it, use it. Your mind. Your strength. Your agility. Use it.”

But you and I would never ever cross paths with Otho if it were not for first time author Andrew Forsthoefel who met and recorded dozens and dozens of conversations like this one with Mr. Rogers during a 4,000 mile cross country ‘Walking to Listen‘ journey in 2011. Forsthoefel began his odyssey about 6 months after graduating from Middlebury College in Vermont with a degree in environmental studies and just after getting fired as a deck hand on a lobster boat.

“A week after I got fired I hatched a desperate plan. I started wondering what it would be like to walk out my back door and just keep going.”

Though unemployed and basically directionless, Forsthoefel’s plan to walk across America does not come across as a desperate plan by a desperate man. Rather, it seems like the inspired idea of a new college graduate who lives life seriously and thoughtfully with enough empathy to imbue his trek with a noble theme boldly written and hanging from a sign on his backpack: Walking to Listen.

Andrew Forsthoefel started honing his listening skills as a college senior interviewing people about what it means to “come of age”. His walk was just an extension-an 11 month extension of that deeply seated need to listen and learn from whomever he could.

Forsthoefel’s empathy for others, his ongoing struggle to find meaning in his own life together with his fluid, light and insightful prose are the three ingredients which make this debut work of non fiction so much more than just another cross country adventurer’s travelogue.

Indeed, Forsthoefel does not hover on the details of his backpacking gear (except for a jogging stroller he eventually used to transport his pack-he named the stroller Bob). He carried the essentials, mostly, a tent, clothes, food plus a mandolin. He camped wherever he could, often in people’s backyards with their permission and he bought food often in gas station mini marts. Frequently however, Forsthoefel found himself the guest of people he met on the way, people who opened their homes to put up and feed a complete stranger.

And it is the writing about the people he meets and how that experience shakes his consciousness where Forsthoefel’s prose shines the brightest. Many folks he met briefly and recorded them on his Olympus LS-10 audio recorder, like college seniors at Sweet Briar College in Virginia or a grandmother working at a gas station who also belongs to a nudist colony or an artist in Cerillos Hills, New Mexico recorded in her kitchen. But the author often spent several days with some of the people he met, people who took him in, fed him, showed him around their communities and shared their stories-of joy, of sadness, of dreams realized or broken and always, the simple day to day stories that begin to give some definition to what it means to be human.

Walking to Listen is poignantly written. In addition to short one page vignettes that separate chapters, Forsthoefel treats the reader to full course servings of some of his more memorable and life changing experiences. He spends pages sharing his experience as a white man walking through Montgomery, Alabama where he met and listened to the descendants of slaves. He recounts over several pages his walk into and out of Mardi Gras in New Orleans, his memorable walk across Texas including a brief meeting with a former president and perhaps the longest section devoted to his time trekking through the Navajo nation reservations in Arizona.

Forsthoefel refers frequently, perhaps too often, to his two muses, Walt Whitman and Rainer Maria Rilke, quoting lines from Leaves of Grass and excerpting long paragraphs from Letters to a Young Poet, two books he carried on his walk. But even his frequent citations only underscore the young author’s fervent searching for a universal truth he hoped to find on his walk, an inner North Star he could use to navigate his life.

So who is Otho Rogers and why should we care? Not the most memorable character Forsthoefel brings to light, Rogers’ sagacious advice none the less is just one reminder that everyone has something to offer if we only take the time to stop and listen.